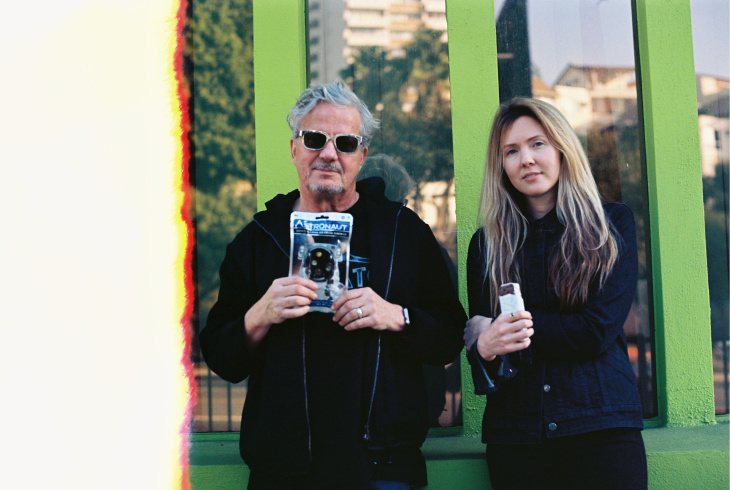 Mark Mothersbaugh had simply gotten out of intensive care after surviving a unhealthy case of COVID-19, when his buddy and fellow artist Beatie Wolfe proposed a collaboration. Why not use postcards to make artwork that might save the U.S. Postal Service and perhaps even democracy itself?

During the pandemic lockdown, Wolfe mentioned writing letters and postcards was “pretty much the one thing that was keeping me sane.” Mothersbaugh, movie composer and co-founder of Devo, has been an enormous fan of postcard artwork for many years. He instructed KPCC/LAist’s A Martinez, host of Take Two, that, as a younger artist in the late 1960’s and early 1970’s, he received concerned in a a lot earlier postcard artwork motion.

“I was a nobody little punk in Akron, Ohio and I found you could send something to Roy Lichtenstein or Jim Dine and you might, couple of weeks later, get a piece of art back…and that was pretty amazing.”

The thought was born and so was the undertaking, Postcards for Democracy, Kas Mothersbaugh and Wolfe began in September. Anyone who needs to take part (together with you, sure you!) could be a part of it.

The thought is straightforward:

Piezīme: Mothersbaugh and Wolfe advise suspending mailing your postcards till 10 days after the election to “give USPS a hand.”

Wolfe says the undertaking is a method of displaying help for the USPS through the use of the USPS. “If we don’t use it we’re going to lose it,” she instructed KPCC/LAist, “and I think it’s important to not take anything for granted.”

So far, it is working.

Every day, the artist duo receives a veritable Santa sack of mail at their Sunset studio. Mothersbaugh says that the artwork spans “the whole rainbow of ideas that are important to people.”

His personal postcard artwork was affected by what he noticed and skilled whereas in the ICU with COVID-19.

“It’s very surreal and some of it’s really, really dark. I remember there were times when I would just try to stay awake because I was afraid to close my eyes, because I was in a dark part of delusions. And then there was another time when I have a memory of writing a whole new album of Devo music. So I’ve got that ready when the time comes.”

Mothersbaugh and Wolfe admit that the Trump administration’s assaults on the USPS darīja play a task in the creation of the undertaking, however they’d at all times needed to do one thing like this, regardless.

Their purpose is not essentially political, Wolfe says. It’s additionally a strategy to put literal pen to paper to counteract the many, many hours of display time we get today.

“It’s a vital way of staying connected with one another, but also with ourselves. Art and nature are core to our humanity, and technology can never really replicate the sense of sitting down and making something tangible.”

So, what’s going to occur to the a whole bunch of postcards at the finish of all this? For now, you’ll be able to see lots of them on the undertaking web site.

Wolfe and Mothersbaugh are additionally hoping to create a secure IRL exhibit and perhaps even a collaboration with the USPS in the future.

How lengthy will they stick with it? At least so long as the pandemic lasts, Beatie says.

"We don’t know how long lockdown is going to keep us isolated…[but] as long as people keep sending them and we are able to sort through the mail, then we will keep receiving them.”

For extra information on learn how to be a part of Postcards For Democracy, go to the undertaking web site.

Augusts 31, 2020
from the fire-them-(out-of-a-cannon)- dept The details of this case are fairly ugly so let's simply dive proper into them. As Lenore Skenazy reported for Reason...
Pāriet uz mobilo versiju